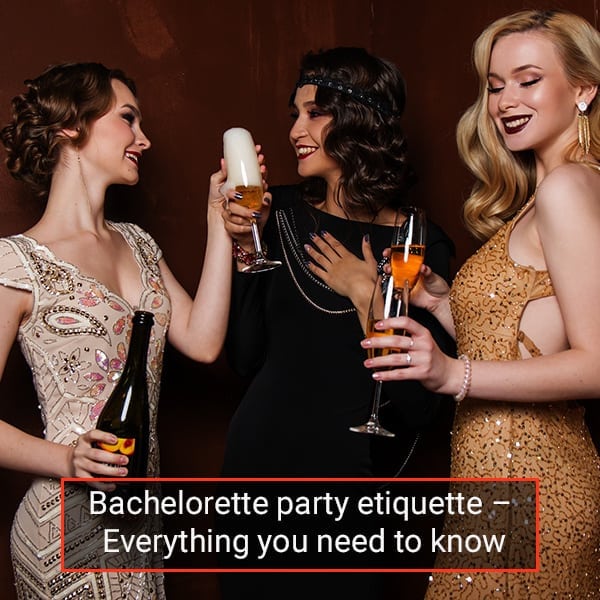 Nowadays, the bachelorette party is considered one of the most important moments in a woman’s life. After all, it’s the last big party she will attend before becoming a Miss. And yes, these events sometimes take on a life of their own.

Considering all these aspects, the concept of bachelorette party etiquette actually became a thing and a lot of women are doing their ‘research’ regarding this before attending one. As expected, before organizing or attending one, there are a few key aspects you should be aware of. Let’s take a few moments and go through the most common…

There’s absolutely nothing wrong in having a bachelorette party

Some people – let’s call them old-fashioned – consider that “nice girls” should not have bachelorette parties, saying that this is not proper at all. But the idea is that this is a wrong thinking!

A woman is at a turning point in her life, so there’s no reason why she shouldn’t go out with her friends for one last time. We know, there are some parties which are really wild, ending up with consuming a lot of alcohol and club-hopping, but this doesn’t apply to all parties!

Bachelorette and bachelor party on the same night? Why not?!

This is not a rule, but it can be a really nice idea for both bride and groom to party at the same time. From a certain point of view, this leaves no time to wonder what the other is doing, right?

The bride is the star of the party, so nobody should upset her, for various reasons, like even disapproving of the way the party goes or her fiancé! As a side note, anybody doing this shouldn’t be present there.

If you have such people in your environment, simply avoid inviting them to the bachelorette party and everything will be just fine.

Moms can actually come to the party if they’re OK

Some brides think about inviting their mother, as well as the groom’s mother to this event, but have second thoughts about this. Actually, if the mothers are cool and extremely close to their daughters, we don’t see any reason why they shouldn’t be present.

On the other side, if things are expected to go wild, they should better remain uninvited. After all, no future bride wants to be seen tipsy!

It’s not just about bar hopping!

There is no rule saying that a bachelorette party should consist just in going from bar to bar and having a drink. If you want to do something else, as a future bride, just tell your friends that you’re not comfortable with their idea. Because hey, it’s your party!

If you’re in charge of organizing the entire event and want to spice things a bit though, you can always invite one or more male strippers. And Florida Thunder can help you with everything, so you and your friends can have a night that you will never forget!